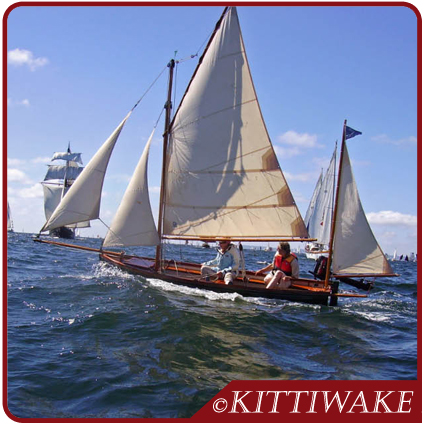 The Kittiwake 14 Classic is designed to give the appearance of a wooden boat, using a simulated clinker hull in GRP and plenty of lovely timber inside so as to hide as much of the GRP as possible.

The cross thwarts and side benches are of solid mahogany with mahogany knees to spread out the stresses.

The beautiful laid iroko foredeck forms a nice contrast against the deep gloss varnish of the gunwale, and is further enhanced by the use of bronze fittings.

Entrance to the large forelocker is through an iroko laid hatch with bronze hinges, this has a neoprene seal on the underside to keep the locker watertight.

The floorboards are of oiled iroko and lift out in four sections for cleaning.

The oars are stored neatly alongside the centreboard housing and are laid into the floorboards so as not to clutter the cockpit.

The floor is also level and flat for sleeping on.

The mast and spars are all made of Columbian pine, the boom 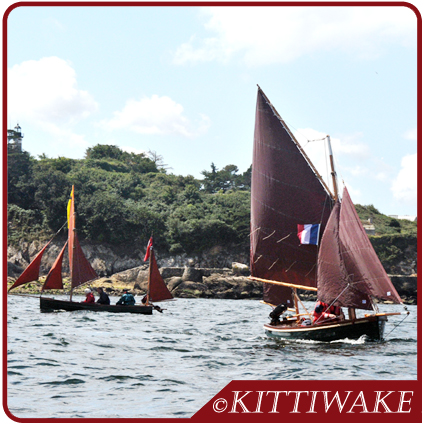 and gaff jaws are leathered mahogany, all these spars stow inside the length of the boat, making for a neat package for trailing, the sails remain attached to the spars so that rigging only takes about fifteen minutes.

Buoyancy tanks are built-in under the side benches. All of these are glassed in and flow coated. The centre board is 10mm galvanized steel, pulley type, on a stainless steel pivot bolt set through bronze bushes.

The plate is housed inside a GRP envelope and then clad in timber.

The sails are of 5oz terylene, in either tan or cream with two sets of reefing points on the mainsail.

The mainsheet is sheeted to the aft end of the centreboard housing so that the helmsman can have mainsheet via jammer in one hand and tiller in the other.

The mainsail is adjustable in height, so you can easily have the boom clearing crew heads, or set low for strong winds.

The mizzen boom hinges up alongside the mast with its sail wrapped around for reefing and stowage. This is also unstayed.

The mizzen is used as a weather cocking sail to keep the boat's head into the wind when adjusting sail trim. 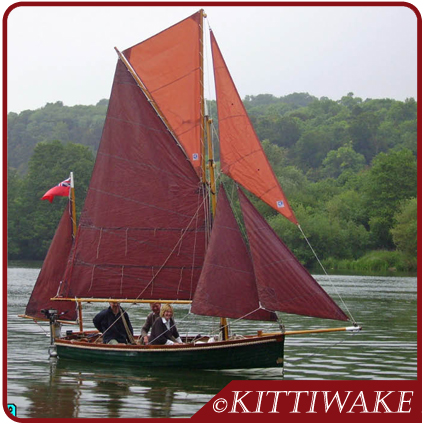 The jib is on a furling drum and swivel, (Wykeham Martin,) so in balance with the mizzen, reducing sail is quick and easy.

The foresail is hanked onto the forestay with brass piston hanks.

The main mast either lies on top of the Samson post and transom and is the same length as the boat, thus giving a nice ridge to the trailer cover for water run-off, and means that the boat will fit in the garage.

Or alternatively the mast can be hinged in a tabernacle making it easier to raise.

If however, the boat is parked outside the cover protects all woodwork, keeping maintenance to a minimum.

Launching is done from the road trailer, as each hub has its own grease nipple which is pumped full prior to launching. Recovery is made simple with the winch and strap, and guide rollers to keep the keel straight on the trailer.

The Kittiwake can carry an outboard engine on the strengthened transom (3-4 hp long shaft,) and rowing her is a delight with the 8'6" sweeps.

The hull is also protected underneath by brass runners on the 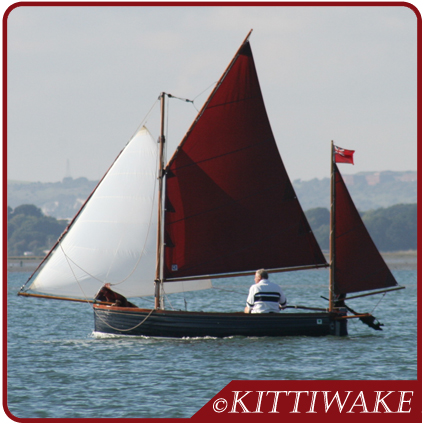 keep and bilges. The rudder is made of laminated 3/4" plywood with a lifting blade.

For light winds, extra sails can be added. i.e. the big light cruising sail, run out on a bowsprit traveler, or try your hand at rigging a topsail.

The gaff cutter yawl rig is beautifully balanced and although if looks complicated is designed to be operationally simple and lends itself to all sorts of rig combinations. i.e. single-handed sailing - leave out the bowsprit and mizzen, and sail as a sloop, or even drop the mainsail and she'll go to windward under two jibs and mizzen.

The custom-made cockpit tent , made by the sailmakers, gives the owner the ability to sail further afield.

With a generous number of fasteners, and extending to the full length of the boat, it is a must for all serious dinghy cruisers.

The Kittiwake 14 is also available in a Tourer version, using the same hull as the Classic, but with a completely different interior moulding with less timber and more locker space and buoyancy.

The Kittiwake 14 is capable of carrying a variety of rigs - gaff, sloop, cutter or yawl.  In all cases the mainmast sits in a tabernacle allowing for singlehanded raising and lowering, and is the same length as the hull, so makes a neat package when trailing.

The sloop rig has a short bowsprit with a fairly large jib. The mainsail has an extended boom overhanging the transom.

The cutter rig has the same mainsail but a longer bowsprit and two small headsails.

The yawl keeps the two headsails, shortens the boom and adds a mizzen mast just inside the transom which overhangs the transom and is controlled via a retracting bumpkin pole.

In all cases the mainsail has two sets of reefing points, the jibs are on furling drums, and the mizzen is easily furled around the mast.

The advantage of a gaff rig is that the spars are easily handled as they are relatively short.

The sails can remain attached to the spars for the whole season so rigging takes less time. There is also a lower centre of effort and therefore less heel for the same amount of sail area.

The advantage of a gaff rig is that the spars are easily handled as they are relatively short. The sails can remain attached to the spars for the whole season so rigging takes less time.