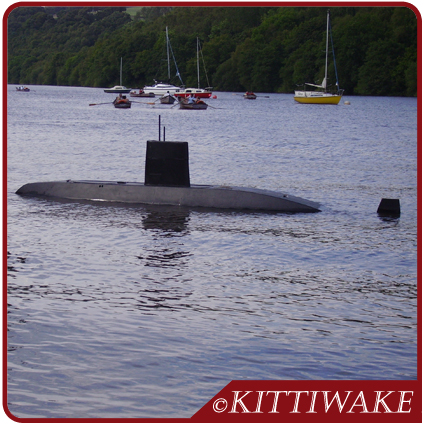 This model was made as a contrast to the Battleship. It is a one-piece model, but could be made as a two-piece, for easier carrying.

It is 16ft in length, and 3ft wide, and weighs about 50kgs. It is the simplest model of the three to build, and only took me nine days to build.

It is also the most sinister, especially viewed in twilight when people are having their G & T's!

This is a lie down model, which is incredibly comfortable, but can seem a bit claustrophobic to some. It is ideally carried on the roof rack as a one-piece,  or on a trailer as a two-piece.

Assembly is simple; slot on the conning tower, the pole and the fin, insert the engine and battery, and it's ready to go.

Again this model is flat-bottomed, and can float in about 5" of water, but again is very stable with good visibility , and very manoeverable.

The opening lid is about 8ft long and 2ft wide, and includes the conning tower, so getting in and out is a bit like climbing into a coffin.

When you close the lid you put your head up inside the conning tower , and back against the head rest.

You are then looking forward, down the deck, with 180' visibility through a gauze screen, so you can see out, but no-one can see in.

Both steering and throttle controls are to hand on either side.

Hire Roger and his fleet for £300 per model per day. Discounts for multiple days and/or models