A proud and traditional history 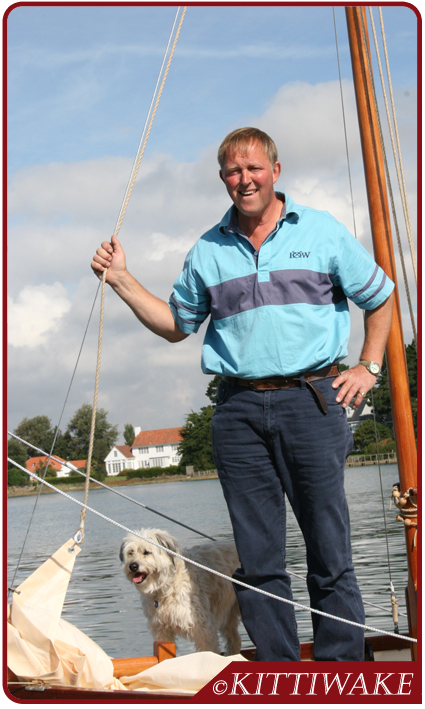 have always had an interest in boats, especially historic working boats. I was fascinated by the ways in which the shape and design of boats were determined not only by the practicalities of their work requirement, but also by their geographical influences, local weather and coastline types: Falmouth Oyster Boats, Sussex Beach Punts and Colchester Smacks and Thames Barges for example.

I came upon my first real traditional vessel whilst in North Wales near Nefyn, where I spotted a little abandoned gaff rigged yawl sitting on some blocks in a field by a wood.

This boat turned out to be a mini Falmouth Quay Punt and had been built in 1935 in Padstow Cornwall commissioned by the then lifeboat coxswain of Padstow for use as a pleasure boat.

I bought this boat in 1975 at the age of 20 and restored it at home in Macclesfield.

Up to 1984 I had been working at Manchester airport in Aircraft Operations and I then decided on a career change inspired by my love of boats. I took a job as a flotilla skipper with Island Sailing in charge of thirteen yachts in the Ionian Sea in Greece.

The flotilla was based in Poros for the March to November season, and working so intensively gave me an opportunity to gain a confidence with boats that people rarely get.

Five years later I came up with the idea of building a smaller version of my lovely Falmouth Quay Punt, something that could be kept in the garage at home and yet trailed anywhere in Britain or onto the continent to explore at  whim.

This image drove me on and on until I had all the ingredients to build my first Kittiwake 14.

The prototype 14 was built with the help of an old friend Tam Smyth, who had enrolled at the boatbuilding school at Lowestoft.

Once my first GRP hull was out of the mould, we took it over to Lowestoft and fitted it out. Together with colleagues from the College we began to construct the first Kittiwake boat.

I had booked the boat into the Wooden Boat Show at Greenwich Maritime Museum in 1987 as a target for having the boat finished.

There were some last minute hitches and although the boat looked finished it was still missing its centreplate and also had never been sailed! However, it arrived at  The Greenwich Boat Show on the beautiful lawns outside the Maritime Museum.

I had also been blissfully unaware that this boat show was really for boats built entirely of wood and that GRP was strictly not allowed. However on opening the show, the host David Dimbleby commented how nice it was to see a GRP boat with so much wood in it.

Now fifty one Kittiwakes have been built and have sold and are sailed all over the world.